Legislation that passed through Parliament last month prevents taxpayers from claiming a deduction for expenses incurred for holding vacant land. The amendments are not only retrospective but go beyond purely vacant land.

People work hard to gain more money in order to save for their future home. However, for many younger Australian, apparently, it takes more than a hard work to pursue a house of their dream. Thankfully, the government recently released a program called the First Home Super Saver Scheme. This program allows people to saveRead More »

The 2017/2018 Budget provides some interesting changes that could affect people with investment properties if the recommended modifications become legislation over the next few months. Minor changes have been suggested to negative gearing, incentives have been increased to encourage property owners to provide affordable housing, and some of the infrastructure funding could offer substantial propertyRead More »

Do you want to get ahead in life financially? Do you have your own goals and are working towards them? If you don’t or if you’re not sure if your goals are the best for you, or if you are struggling to reach your goals, it may be time to evaluate some things around yourRead More »

SHOULD YOU DECLARE INCOME WHEN RENTING ROOMS IN YOUR HOME?

We’ve seen quite a bit of confusion recently around whether renting out a room in your primary residence counts as declarable income to the Australian Tax Office (ATO). Guidelines that are available on this topic tend to be rather difficult for the layperson to decipher, leading to many incorrect claims – whether people declaring incomeRead More » 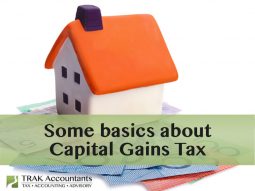 SOME BASICS ABOUT CAPITAL GAINS TAX

Capital gains tax is a tax on the ‘profit’ from having decided to buy, and later sell an investment. If you don’t make a gain, then there’s no tax to pay, and potentially the loss you made has to be held on record in your tax return. The way capital gains works for individuals isRead More »

Feel free to contact us for a complimentary consultation. Let us get you on TRAK to success